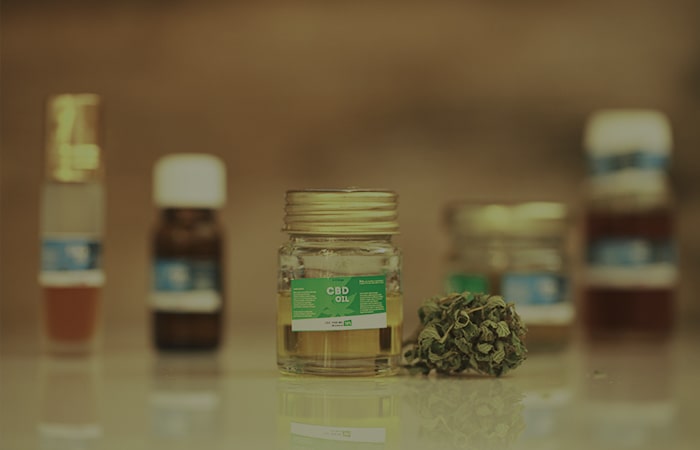 It’s likely that you have encountered the terms “full-spectrum” and “isolate” while shopping for CBD. These two labels basically tell you the kind of cannabinoid content you can expect in your product.

Cannabidiol, or CBD, is just one of many cannabinoids. This means that it is one of the active compounds found in the cannabis plant, of which there may be over one hundred. While CBD and its psychoactive counterpart, THC, are found in high quantities and are the most well-known, there are plenty of other cannabinoids worth knowing about.

This includes CBG, the precursor to both CBD and THC, and CBN. Each cannabinoid has different effects on the body, and it is thought that combining the various cannabinoids can lead to a strengthened effect on the body.

Let’s delve a little deeper into the terms “full-spectrum” and “isolate” to find out precisely what they mean with regard to these cannabinoids.

Firstly, What is CBD Isolate?

Probably the most basic form of CBD is an isolate. These contain nothing except pure, isolated CBD. In other words, there are no other cannabinoids, terpenes, or flavonoids – just good old CBD.

Although this might be considered ‘basic’ at first glance, it is actually much harder to glean an isolate from hemp. When hemp undergoes the extraction process to remove its cannabinoids, all of the plant’s compounds are extracted. All the cannabinoids and terpenes come out of the plant. This means that extra steps must be taken in order to isolate the CBD and free it of any other compounds. Because of this, CBD isolate is quite hard to make.

It comes in many forms. The most common CBD isolates you will see are dabs. In case you didn’t know, “dabbing” is the act of vaporizing compounds on a hot nail and inhaling the resulting vapor. It’s kind of like vaping, except you don’t use an e-cigarette or an e-liquid. CBD isolate dabs come in the form of powder, crystals, wax, resin, or shatter, so-called because of its glass-like texture.

However, dabbing is not for everyone, and it is becoming increasingly common to see CBD isolate oils, edibles, and capsules, among other things.

What is Full-Spectrum CBD?

In contrast to isolates, full-spectrum CBD products contain a full range of cannabinoids. When the cannabinoids are extracted from hemp, the entire extract is made into a consumable product, meaning that you are getting a healthy dose of all the cannabinoids that were in the plant.

The primary concern here regards THC. If you live in a state where cannabis is illegal, or if you simply don’t want to consume THC yourself, then you might be concerned about THC content. However, due to federal laws all CBD products must be extracted from hemp and not marijuana. By definition, hemp contains less than 0.3% THC, meaning that the extract will also only contain negligible amounts of THC. These trace amounts will definitely not get you high.

So what are the benefits of a full-spectrum CBD oil? It used to be believed that isolated CBD was more effective than full-spectrum, but now the opposite is the case; most now agree that full-spectrum CBD is the preferred option because of something called the “entourage effect.”

This phenomenon refers to the way in which cannabinoids work together to become more effective. A study in 2005, conducted in Jerusalem, found that test subjects given full-spectrum CBD experienced heightened relief compared to those who received a CBD isolate.

Generally, users prefer to use a full-spectrum CBD in order to improve their general well-being. This does not make CBD isolates redundant, though.

What About Broad-Spectrum CBD?

It’s likely that you have also seen the term “broad-spectrum.” This refers to a CBD product that contains a range of other cannabinoids, but no THC. It allows for most of the benefits of the entourage effect, but with no risk of consuming THC.

This is ideal if you are completely against THC, if you are worried about taking it, or if you are often drug tested at work. Of course, a CBD isolate can also be used, but you won’t experience the full force of the entourage effect at work.

Should I Use Full-Spectrum or a CBD Isolate?

Now that you know what each term means, you might be wondering how you make a decision between the two. There is no way to know for certain what the best type of CBD for you is; it is just a matter of weighing up the pros and cons.

CBD isolate has the advantage of being the purest and most potent form of CBD. It often contains upwards of 90% cannabidiol. There is no risk of psychoactive effects, and minimal risk of flagging a false positive on a drug test. Furthermore, CBD isolate is both tasteless and odorless. This is perfect for those wanting to cook with CBD, as it can be added to recipes without altering the flavor at all. The only real drawback to CBD isolates is that they don’t create the entourage effect.

As for full-spectrum CBD, the glaring advantage is the entourage effect. If you are looking for powerful, efficient CBD, then this is the way to go. Furthermore, it is often considered closer to the original plant, and is therefore the most authentically natural. It undergoes less processing when compared to isolates.

The cons of full-spectrum CBD are that it may flag a positive on a drug test due to the fractional THC content. The negligible amounts will probably be dismissed in a follow-up test, but a positive could cause you unnecessary stress.

Secondly, the terpenes and flavonoids from cannabis can create a strong taste and aroma that some people find to be unpleasant. While there are ways to deal with it, it can be easier to just use an isolate product.

CBD Isolate is Best for…

Full-Spectrum CBD is Best for…

We should stress that no CBD type is better than any other. While full-spectrum products are suited to some individuals, others will find an isolate more to their liking. It’s a matter of deciding what works for you.

Here at PureKana, most of our products are full-spectrum, allowing you to experience the benefits of the entourage effect. However, if you would like to try a CBD isolate, all of our CBD Pure Picks contain an isolate, and so do our vegan gummies. You can also try out our Midnight Roses CBD Bath Bomb for a luxurious, skin-loving CBD isolate experience.

Related Articles
What is CBD Hemp Oil? [Full Guide]
How to Find the Right CBD Product [Quick Guide]
How Does CBD Work for Dogs?
5 Things to Know When Shopping for CBD
How to Avoid Fake or Poor-Quality CBD Hemp Oils
How Does CBD Oil Make You Feel?
CBDa Cannabinoid 101: The Importance of Carboxyl Groups
CBD Oil with THC: All You Need to Know
The Ultimate Experience with CBD Bath Bombs
COMMENTS
S
StinkyPuss
I be like it CBD that ain't isolate. I is like that there full speculum.

Full spectrum CBD is be the one me takes as tincture. It smooth and have great taste. On top that I ain't get high. Me can function normal all day and night.

I didn’t know what full spectrum meant so I googled it and your company came up first. I read the article that explained full spectrum and isolate so well I read it out loud to my husband. Thank you so much for the through explanation.

A
Aicelef
Full Spectrum is Awesome!!

Full spectrum works for me, Unfortunately since my company is nationwide my spectrum days may be over. I've tried other gummies and they don't compare to the 2000mg gummies I've discovered here

I take Full Spectrum and am doing fine with it. So relieved.

Full-spectrum is probably better for those who do not have a problem with the fact that there will be some amount of THC in the oil. I personally think it is better because other nutrients tend to stay during the extraction process.

G
Gina
A+ for isolate

Isolate isn't that bad as most people think..

M
Mary
Stiffness in the knees

I have a knee problem. A lot of stiffness. What would be the best?